When Adam Smith was a child as far back as first grade, he had to keep his hands busy. Whether he was doodling in his notebook, building model trains or later drawing floor plans for houses that he dreamed to inhabit some day, he had the desire to create things with both the precise eye of an architect and the creative mind of a painter. This precision and vision soon culminated into an artistic realism where landscapes appear as photographs on a much larger canvas.

Mr. Smith, now 33 grew up on the North Shore with the coastlines and surrounding landscape serving as a constant source of inspiration. Encouraged by his family’s passion for water and boating, he was exposed to breathtaking coastal scenes early on.

“My grandparents had a boat in Port Jefferson,” he recalls. “Being out on the boat, it provided a different view of the scenery and coastline.” Several of his works, including “Danford’s Marina,” “Pre-Season at Preston’s” and “The Bounty,” reflect his love for the nautical North Shore, particularly his native Port Jefferson.

With a Bachelor of Fines Arts degree from Syracuse University, one can see that Mr. Smith is a student of photorealism, a genre where paintings are made to appear like a photograph. “I’m somewhat of a perfectionist,” says Mr. Smith in his home studio. “I want to make the painting technically correct, to reproduce it like a photograph.” Although this obsession with accuracy seems more suited toward architecture and design, he feels the discipline of fine art painting fulfills his deeper need to express his passions and creativity.

Like Richard Estes, one of the early pioneers of photorealism in the 1960’s, Mr. Smith’s brushwork is barely detectable in his photo-like rendition of “West Meadow Windsurfer,” where sand, seaweed and water capture the exact textures, colors and depths that seemingly only a digital camera could reproduce. It is a painting that compels the viewer to walk barefoot across the expanse and slowly descend into the calm waters behind it.

What you will not see in Mr. Smith’s paintings is any distortion of truth. His fondness of photorealism is evident in the clean lines, details and colors in every nook and cranny of each pebble, piece of wood or foaming wave.

In the cover photo, “Saturday Morning-Port Jefferson Harbor,” a 16” x 20” oil on canvas done last year, Mr. Smith gives some background to its creation in an accompanying essay;

“It was a brilliant morning in late spring on Long Island. The atmosphere was quiet; the tug boats tied up; the fishing charters out for the morning; the launch boats yet to be summoned and the day trippers soon to arrive. As I walked toward the ferry pier I was struck by the intense color beaming across the harbor. The red and white striped smoke stacks pierce the brilliant blue sky as they cast a glimmering reflection across the water. The slightly rippled surface of the harbor reflects the pure sunlight of the moment and the densely populated marina. Then, perhaps the most impressive and powerful element in the harbor, there is the crimson-colored tugboat. This mighty tug is rich with texture and exudes a stalwart character as she sits at rest awaiting her next mission. However, with all the industry and recreation of the harbor, there seems to be a strange absence of people. This is the way it was, the most beautiful time on the harbor – clear, quiet and full of potential for the day to come.”

In “Strong’s Neck,” my personal favorite, Mr. Smith replicates with meticulous detail the soft ripples of water, the sun’s glittering reflection and every reed and rock in exact likeness. Examining the canvas up close, it was hard to imagine the process that would produce such a work.

As Mr. Smith tells it, “The execution and process of the creation is just as important as the finished product. It’s important to render the subject in the most accurate way, and bring out subtleties that the viewer might not otherwise notice.”

To break it down, first Mr. Smith will take a number of photographs using different exposures to select from various kinds of lighting and colors.

“I paint from photographs that I take and then do a composite and work off of that,” he says. “Sometimes I’ll make adjustments in Photoshop to get it just right.”

Once he has found the photo he’d like to paint, he sketches his subject in pencil then adds color in an acrylic or other medium throughout the whole sketch. Using oils, he then focuses on one small section of the painting at a time, filling in the specific details before moving to the next section. He prefers to work back to front, painting a sky before the foreground objects. He may decide to make the photographed colors richer in order to draw one’s eye to the scene, like the bold red he utilizes in the signs and buoys of “Deep Sea Fishing.”

Each painting is a carefully calculated decision of composition, light, shadow and spatial relationships designed to tell a story and attract the viewer.

“As a realistic oil painter, one of the main goals in translating our environment on to canvas is to reach out to those observing the painting,” explains Mr. Smith. “I want the person to look into the painting – to make them feel like they are there and they can walk through it.”

Beginning with acrylics in high school, Mr. Smith later experimented with various media through college until he settled on oils, which he prefers because it lends itself best to thinly layering paint and building it up to create depth, shadow and physical presence. Oils also add the rich shimmering feel that engages each viewer and beckons them to explore his paintings further.

However, Mr. Smith will sometimes deviate from the oils as he does in “Taxi!,” a gouache – or opaque watercolor – medium, resembling Norman Rockwell’s “Sport,” with its similar bright whites an color contrasts.

Mr. Smith’s paintings have graced the covers of the Hamptons publication “Dan’s Papers” twice in 2006 with his “Pumpkin Patch” and “East Hampton Surf.” In “Pumpkin Patch,” done from a photo taken in Calverton, the oranges mix with dull yellows and hints of green inside the pumpkins’ textured lines while the shadows bring such depth and dimension that the viewer is ready to take one home to make pie.

Mr. Smith’s studio and home contains a large array of artwork including paintings and prints of other locations he has visited such as the magnificent blue-green waters of St. John, the darker and somber buildings of Florence, Italy, and a piece entitled “No Fishing” (1993), which depicts a dock at wintertime, painted at the age of 17. He has also painted incredibly tiny scenes on driftwood that he found and transformed into lovely art pieces that have sold out, including the 5”x14” “Setauket Harbor Reflections” as well as book covers and artwork inside pinball machines. He is a freelance illustrator for ad agencies and currently works as graphic designer while he continues to exhibit and create work on private commissions.

For the last fifteen years, Mr. Smith’s award-winning work has appeared in many local, national and international exhibits and shows. He has had his work shown at the Christopher Gallery several times in the last few years, Guild Hall in East Hampton, Artist’s Gallery in Greenport, Gallery North in Setauket, Montreal, Canada and Florence, Italy. 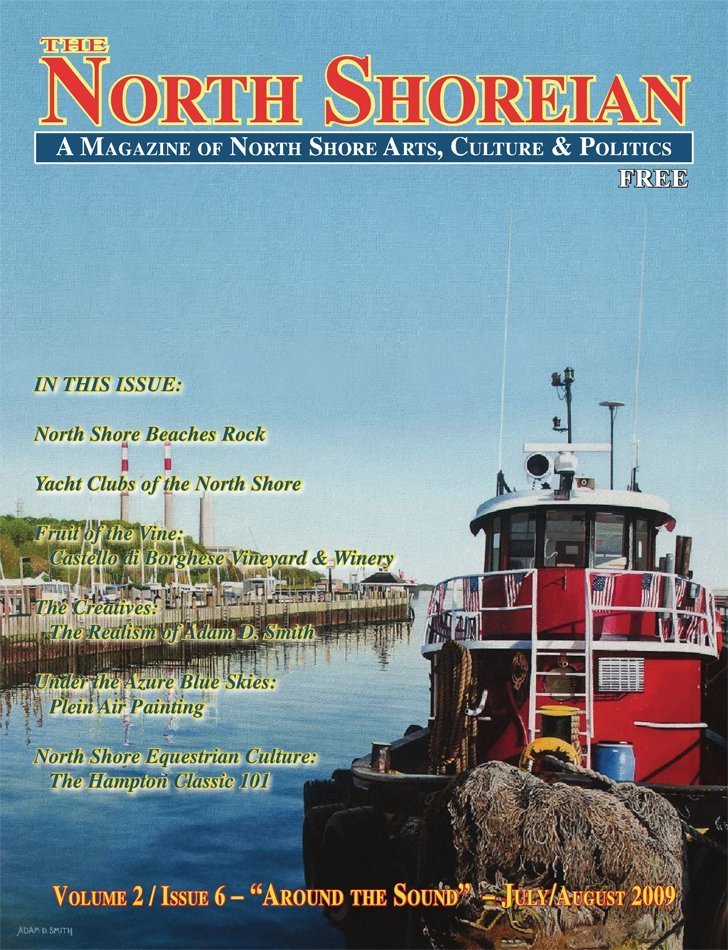 We use cookies on our website to give you the most relevant experience by remembering your preferences and repeat visits. By clicking “Accept”, you consent to the use of ALL the cookies.
Cookie settingsACCEPT
Manage consent

This website uses cookies to improve your experience while you navigate through the website. Out of these, the cookies that are categorized as necessary are stored on your browser as they are essential for the working of basic functionalities of the website. We also use third-party cookies that help us analyze and understand how you use this website. These cookies will be stored in your browser only with your consent. You also have the option to opt-out of these cookies. But opting out of some of these cookies may affect your browsing experience.
Necessary Always Enabled
Necessary cookies are absolutely essential for the website to function properly. This category only includes cookies that ensures basic functionalities and security features of the website. These cookies do not store any personal information.
Non-necessary
Any cookies that may not be particularly necessary for the website to function and is used specifically to collect user personal data via analytics, ads, other embedded contents are termed as non-necessary cookies. It is mandatory to procure user consent prior to running these cookies on your website.
SAVE & ACCEPT
error: Content is protected!